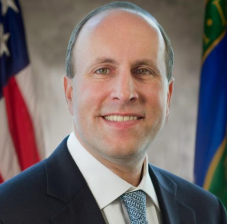 The Honorable Paul M. Dabbar, Under Secretary for Science, serves as the Department’s principal advisor on fundamental energy research, energy technologies, and science, driving this mission through programs including nuclear and high energy particle physics, basic energy, advanced computing, fusion, and biological and environmental research, and direct management over a majority of the Department’s national labs and their world-leading user facilities. In addition, Mr. Dabbar manages the environmental and legacy management missions of the Department, addressing the U.S. legacy of the nuclear weapons production and governmentsponsored nuclear energy research.
Prior to confirmation as Under Secretary for Science, Mr. Dabbar worked in operations, finance, and strategy roles in the energy sector. As a Managing Director at J.P. Morgan, leading various enegy business areas, he has over $400 billion in investment experience across all energy sectors including solar, wind, geothermal, distributed-generation, utility, LNG, pipeline, oil & gas, trading, and energy technologies, and has also led the majority of all nuclear transactions. In addition, he had a senior leadership role for the company’s commodity trading business, including power, oil and gas.
Before joining J.P. Morgan, Mr. Dabbar served as a nuclear submarine officer in Mare Island, California, and Pearl Harbor, Hawaii, including deploying to the North Pole where he conducted environmental research. He also served on the Department of Energy Environmental Management Advisory Board. He has been a lecturer at the U.S. Naval Academy Economics Department, and conducted research at the Johns Hopkins Applied Physics Laboratory.
Mr. Dabbar received a B.S. degree from the U.S. Naval Academy, and an M.B.A. degree from Columbia University. Mr. Dabbar and his wife, Andrea, are the parents of two children.