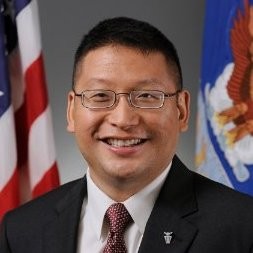 Pete Kim is the Chief Information Security Officer at Raytheon Missiles & Defense, a $16B a year enterprise. He oversees the company’s cybersecurity strategy and deploys a wide range of services for a workforce of 31,000+ to protect information technology and operational technology assets, infrastructure, and information.

Pete is a retired United States Air Force Colonel and Senior Executive Service member where he held multiple leadership positions shaping national cyber strategies. While assigned to the Joint Chiefs of Staff in the Pentagon from 2008 to 2010, he contributed to Presidential and military cyber policies during the Obama Administration. He was responsible for executing cyber operations and cybersecurity strategies while assigned to United States Cyber Command, and he led a cyber task force for the Air Force Chief of Staff from 2015 to 2017. In 2013, Pete launched a cybersecurity firm and consulted with a variety of defense and aerospace companies.

Pete holds a bachelor’s degree in electrical engineering from Vanderbilt University in Nashville, Tennessee, and he is a Certified Information Systems Security Professional.