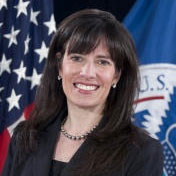 Phyllis has more than 15 years of government and private-sector experience in senior cybersecurity positions and leads Promontory’s cybersecurity practice.

She joined Promontory from the Department of Homeland Security, where she served as the deputy undersecretary for cybersecurity and communications and led responses to cybersecurity threats against corporations, civilians, and the government. During her DHS tenure, Phyllis led the defensive cybersecurity operational mission to mitigate and respond to cyberthreats across the federal civilian government and private sector. She supported the department’s mission of strengthening the security and resilience of the nation’s critical infrastructure, working with all areas of the department, government agencies, law enforcement, and the private sector. Phyllis led the transformation of signature technology applying analytics to the central cyber protection that the DHS provides to civilian agencies.

Prior to the DHS, Phyllis served as chief technology officer for the global public sector at McAfee, where she was responsible for products and services used by governments to counter global cyberthreats and maintain industrial and telecommunications security. She also led the development of the firm’s crowdsourced real-time cyberthreat intelligence and analytics used to protect critical infrastructure, played a key role in developing McAfee’s cybersecurity policy position, and on several occasions testified before Congress on cybersecurity technology and policy.

Phyllis was a member of the Center for Strategic and International Studies’ commission that advised President Barack Obama on cybersecurity. She was chairman of the board of directors of the National Cyber-Forensics and Training Alliance, a partnership between corporations, government, and law enforcement for using cyber analysis to combat international cybercrime. Phyllis was also vice chairman of the National Institute of Standards and Technology’s advisory board on information security and privacy, and she served for eight years as national chairman of the board of directors of the FBI’s public-private InfraGard program. She has briefed and worked with several foreign governments to form partnerships with the U.S. for information sharing, infrastructure protection, and cybersecurity. Phyllis holds several information-security and technology patents.