Predix and Azure: A Perfect Match, Made in the Cloud 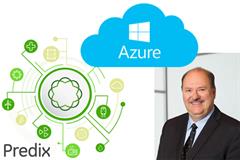 Last week, GE and Microsoft announced a partnership making Predix available on the Azure cloud. As most of you already know, Predix is GE's platform for the industrial Internet of Things (IoT) and Azure is Microsoft's cloud for business.

On the surface, it looks like a match made in heaven. But it's hard to see through clouds. That's why I'm glad that Bill Ruh, the CEO for GE Digital as well as the SVP and Chief Digital Officer (CDO) for GE, pitched in to discuss some key questions about the partnership.

We asked Bill to describe the short-term benefits of the deal with Microsoft. Here's his reply, slightly condensed:

"Our partnership with Microsoft allows customers around the world to capture intelligence from their industrial assets and leverage Microsoft's enterprise cloud applications. This collaboration is all about giving customers choice and flexibility. Many of our customers are already users of Microsoft enterprise technology, so it is already established in the industrial world."

Next, we asked Bill about the longer term benefits of the partnership. Here's his reply:

"Long term, we expect our partnership with Microsoft to accelerate the adoption of industrial IoT and the convergence of IT and OT, simplify the integration of enterprise data with machine and operational data, and offer a new range of applications for industrial businesses."

Lastly, we asked Bill what excited him the most about the opportunity of working closely with Microsoft on a large scale effort:

"Together with Microsoft, we will deliver a powerful set of industrial IoT capabilities that can meet the needs of virtually any customer, with any set of requirements, anywhere in the world. The combination of our technologies will help drive digital transformation across the industrial world. This partnership is another step in building the digital industrial ecosystem to grow the Industrial Internet and help it thrive on a global scale."

I like that Bill included the idea of building a digital industrial ecosystem as a key potential benefit. The notion of an industrial Internet is hard for most people to grasp, but it's absolutely critical to the future economic health of our nation and our world.

Here's my take, based on what I've observed from our vantage point at HMG Strategy: Predix is a great example of the "build it and they will come" philosophy. The technology behind Predix is absolutely top-notch, but it's not clear that GE had found a market for it. And that was a problem.

Partnering with Microsoft is a leap toward solving that problem. Ideally, GE will leverage Microsoft as a platform for marketing Predix to a wider audience of enterprise customers. From a business perspective, the partnership makes total sense.

Both companies are seeking similar goals, and the partnership looks like a great way for two global giants to ride the same wave to higher sales revenues. The partnership might not make headlines, but it will probably make money.