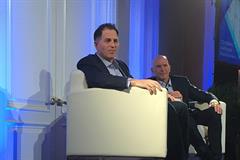 Last week, I had the honor of sharing the stage with two living legends: VMware CEO Pat Gelsinger and Michael Dell, the founder and CEO of Dell, Inc. The setting was VMworld 2016 CIO Forum at the Four Seasons in Las Vegas, and the atmosphere was charged with excitement and energy.

The sense of excitement was definitely enhanced by several truly important business announcements, including news that Dell, Inc. and EMC Corp. intend to finalize their plan to combine forces on Wednesday. Dell Technologies, the name of the new combined company, will begin operating immediately following the close of the transaction, according to a press release issued during VMworld at the Mandalay Bay Hotel. VMware is a subsidiary of EMC, which made the announcement especially remarkable at the packed event.

There's no question in my mind that the partnership between Dell and VMware is a clear indication of the future state of the IT industry. It's exactly the kind of close-knit collaboration that will drive the industry forward, while simultaneously enhancing both relevancy and profits.

Here's snippet from the VMware website that speaks volumes:

Dell and VMware deliver virtualization and cloud infrastructure solutions that are fast to deploy and easy to manage. The partnership is built upon a strong history of working together to build, test and implement solutions involving VMware technology and Dell servers, storage, networking and services. With shared strategies, joint engineering and mutual expertise, Dell and VMware have built tightly integrated solutions at each level of the IT ecosystem, and have also developed a strong global services and sales practice.

The Dell and VMware alliance has worldwide scope and focuses on a single goal: to help customers change their world with IT that's optimized for agility, dynamic response and value, for a software-defined future-ready enterprise.

From my perspective, the VMworld CIO Forum was a spectacular success. It was a genuine pleasure sharing the stage with genuine IT rock stars like Pat and Mike, and listening to brilliant keynotes from world-class executives like Greg and Alberto. I'm certain the partnership between Dell and EMC will drive new business opportunities and accelerate the pace of digital transformation on a global scale.