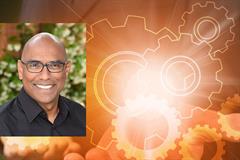 HP is no stranger to acquisitions, joint ventures, and spinoffs to help strengthen its core business. A few of HP’s more notable acquisitions include its 2008 deal for IT services firm EDS as well as its 2010 purchase of mobile device maker Palm Inc. These deals were followed by the company’s 2015 decision to split into two companies – Hewlett Packard Enterprise, which represents the company’s servers, storage, networking, and services, and HP Inc., which constitutes the company’s printing and personal systems business.

The formation of HP Inc. has represented yet another opportunity for CIO Naresh Shanker to spread his wings and provide powerful leadership for spearheading the revitalization of the organization.

Shanker, who was previously CIO at Palm Inc. and HP’s Printing and Personal Systems Group, speaks from experience when he says that coming off a separation offers a company an incredible opportunity to transform the brand and the business.

“The trajectory of a separation of this magnitude is a catalyst for change, especially for a 75-year old Fortune 20 company. It’s an opportunity to reinvent, differentiate your brand and win as you transform over the next five years,” said Shanker, who participated in an executive interview with HMG Strategy President & CEO Hunter Muller on “The State of the CIO IT Leader Role: The CIO as the CEO of Technology” at the 2017 Global Innovation Summit on January 12, 2017 in Palo Alto, CA.

One of the key learnings for Shanker has been the importance of developing an effective team that has the right skills, drive, and stamina to successfully support a transition of this magnitude. “Working with talented teams over a decade across diverse industries has helped me define future states and related execution strategies”, said Shanker.

There is a myth in the business world that in order to be a great leader, a person needs to manage a large team. But that’s not always true, said Shanker. “As an example, I have worked with talented solution architects who are leaders because they have been able to bring holistic thinking into solving complex business problems across highly matrixed organizations. These qualities become even more critical to the success of a team when working in dynamic and complex environments across different geographies,” Shanker said.

“I look for true value that employees can create regardless of the hierarchy of their job or role,” said Shanker. “It is important to foster an environment that enables people to excel – whether by leading a team or by working as a unique individual contributor. Coaching, mentoring, and providing skills training have been my focus as I have taken teams through intellectually and operationally demanding transitions.”

One of the key attributes of great leadership is the ability to lead the narrative that effectively connects people. “It’s about being able to communicate and internalize a shared vision and purpose. Because of the 24x7 nature of our work, it’s important for every team member to be able to proactively take the baton forward based on their clear understanding of shared goals. You’ve got to create a highly collaborative and trusted environment to inspire commitment - especially when stakes are high and potential burnout severe,” according to Shanker.

Shanker also recognizes the importance of fostering a culture that rewards success while candidly acknowledging failure and its teaching moments. “It’s critical to create an ecosystem where people are allowed to play fearlessly and with a purpose. A key ingredient of success is the teams you build and empower around you,” notes Shanker.