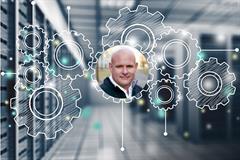 Simply put, data is the new oil of the digital economy. However, many legacy companies that strive to become data-driven are hamstrung by complex infrastructures and data silos that prevent decision-makers from extracting the full range of insights that are needed to act swiftly on ever-changing customer and market trends.

Functional and data silos block the aggregation of data across the enterprise, preventing executives and knowledge workers from gaining a complete view of actionable intelligence. This helps explain why most companies are capturing only a fraction of the potential value from data and analytics, according to a McKinsey Global Institute study.

Most traditional approaches to integrating data silos are extremely time consuming and only address part of the problem. Unstructured data, such as audio, video, and unstructured text from email and electronic documents, represents roughly 80% of the world’s data and has to be cleaned and formatted to make it more usable.

One very effective way to unify and cleanse data across the enterprise is through automation. Tamr (pronounced TAMER) is a Cambridge, MA-based enterprise data unification company that’s helping clients such as GE and Thomson Reuters to combine and clean data through a combination of machine learning and human expertise.

“At Tamr, we spend a lot of time working with large organizations that are trying to do predictive analytics and AI and almost every time they come to the same conclusion: until I can clean my data and get it organized, we can’t do this more predictive and advanced AI stuff,” said Andy Palmer, Tamr Co-Founder and CEO.

While Tamr’s application is machine-driven, it’s also human-guided. “You have to engage with subject matter experts in enterprises to answer intuitive questions,” said Palmer. “The human touch helps to make data much more contextual.”

Just as a CFO is required to know the source of a company’s capital flows, Tamr helps its clients to understand where its data comes from, how it’s being consumed, and how it can be applied.

“Once you’re able to do that, then all sorts of things suddenly become possible,” said Palmer.

Palmer said Tamr typically starts each client off with a tactical engagement, such as the aggregation, cleansing, and use of data to attack a specific business challenge. Tamr’s initial work with GE was focused on improving spend optimization. GE has since extended its work with Tamr to gain a unified view of its suppliers which has been used to power sourcing analytics to help drive down component costs and improve payment terms. Developing a clean supplier list also enabled GE to eliminate one-third of the original records in its supplier master list by identifying and eliminating duplicate files.

GE’s work with Tamr across several business divisions in aggregating and collecting data across 400 procurement systems saved the company $80 million within six months and several hundred million dollars over the past few years.

Identifying and acting on business challenges such as these via machine learning offers tremendous upside for enterprises that are stymied by data silos. Said Palmer, “It’s the unsexy underbelly of using data to extract insights and obtain value.”