Ramón Baez: Business Transformations Have a Need for Speed 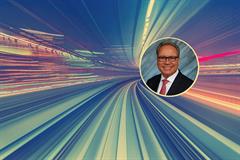 Executives at large enterprises are acutely aware of the need to transform their businesses and operating models in order to succeed in today’s highly-dynamic business environment.

Faster, nimbler companies that are able to leverage technology to disrupt industries (think Netflix, Uber, Airbnb, Amazon) are pushing long-established companies out to pasture. In 1965, the average tenure of companies on the S&P 500 was 33 years, according to a study conducted by Innosight. That tenure is projected to shrink to 14 years by 2026, with roughly half of the current S&P 500 at risk of being unseated.

“We were in a turnaround and to transform a company during a turnaround, time is your enemy,” explains Baez, who will share the key principles of HP’s transformation at the 2017 Greenwich CIO Executive Leadership Summit on October 19, 2017. “We not only had to fix what was wrong with the company but do it in record time.”

HP developed a project code-named ‘Velocity’ that was aimed at accelerating its business transformation all while it was preparing to split HP Inc. from HPE. “We were trying to create an environment of customer centricity,” said Baez, former CIO of HP, Kimberly-Clark, Fisher Scientific, Honeywell and Northrop Grumman, who is currently Co-Chair of HMG Strategy Thought Leadership and CIO Evangelist. This included fostering a cultural transformation of becoming more customer-centric in HP’s IT organization, both for both external customers and internal customers/employees. “We needed to focus on becoming less risk averse and being more willing to take chances.”

Part of Baez’s actions included creating greater transparency around the investments being made by HP’s IT organization. “When companies are doing extremely well financially, they don’t pay attention to this piece,” said Baez. “People either don’t negotiate well or they pay too much and this increases waste. An IT leader who can manage this well is able to handle the big stuff going forward.”

The first principle behind HP’s transformation efforts was a focus on speed. “The number one principle is to drive change with incredible speed,” said Baez. “This means you have to learn very fast from your failures because failures are going to happen. If you’re not transforming your business, your competitors are transforming theirs and that’s going to have a direct impact on the market and on your company,” added Baez.

The second principle for business transformation – and for digital transformation in particular – is that it’s not simply a matter of overhauling software or the company’s technology infrastructure. It’s about rewriting the business, said Baez.

Tearing down the walls

The biggest obstacle to business transformation as Baez sees it is a company culture that isn’t adaptable. “If you don’t get your culture in place from the top down, it’s not going to work,” said Baez. This starts with eliminating bureaucracy, breaking down silos, and tapping the right people to manage agile teams.

“As John Rossman (Managing Director, Alvarez & Marsal and author of The Amazon Way) pointed out when he was at Amazon, they all trusted each other,” said Baez. “Their culture is not about individualism; it’s about doing the right thing for your company and working as a team.”

When Baez first joined HP in August 2012, even the IT function was so siloed that IT staffers from one part of the organization (systems) weren’t allowed to suggest potential improvements to one of their peers in the application development group. Instead, ideas had to be sent up the chain of command.

Once he had a bearing on the IT culture at HP, Baez began working with individual teams to identify ways to improve speed to delivery. For example, what once took 21 days to deploy a server to the application development group at HP was narrowed to four hours by breaking down silos and processes.

“We were able to make similar improvements in other areas by removing the bureaucracy,” said Baez.

In the end, the split between HP Inc. and HPE – one of the largest separations in corporate history – was completed in nine months. The key to all of this – and any significant business transformation, explained Baez – is a need for speed.

“You’re trying to create an operating model of becoming more nimble and agile for your customers,” said Baez. “That’s the reason for speed, because every company that was created in the 20th century is at risk of being supplanted by a faster tech-savvy company that’s been formed in the 21st century.”

Ramón Baez will be presenting at the 2017 Greenwich CIO Executive Leadership Summit on October 19, 2017. To learn more about Baez and other speakers at the summit, click here.