Eye on London: Bracing for Brexit 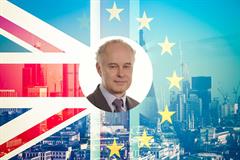 Plans for the United Kingdom to separate from the European Union in the Spring of 2019 have left executives with a great deal of uncertainty regarding the potential business impact both for UK-based businesses and other businesses in the EU with British connections.

While it’s nearly impossible to predict the extent of the economic impact from Brexit, reverberations are beginning to emerge. According to the Bank of England, the level of investment in British businesses is expected to be roughly 25% lower by 2019 compared to pre-referendum forecasts.

Regardless of how Brexit plays out, businesses and IT organizations need the agility to contend with any potential disruptions caused by the UK’s withdrawal from the EU.

Claranet is one of Europe’s leading managed IT services providers whose head office is in the UK. As the CIO for the company, Andy Wilton has been communicating and planning with members of Claranet’s executive leadership team and his IT staff on Brexit’s potential consequences.

“What we are concerned about is the effect on the overall economic climate for the UK and how it may impact business here,” said Wilton. “It’s a side effect rather than a direct effect.”

Still, there are potential ramifications for Wilton and how he manages his IT organization. For instance, around half of his team’s software development work is currently done in Portugal. Depending on the relative strengths of the UK economy and the broader European economy, it may become much more or much less cost-effective to continue with software development work in Portugal.

“I may need to re-distribute this. We just don’t know yet,” said Wilton.

There’s also been widespread conjecture as to whether Brexit may affect UK-based companies’ compliance with the forthcoming General Data Protection Regulation (GDPR), a new set of data protection rules for the EU which become enforceable in 2018. All signs point to UK companies having to adhere to GDPR requirements when conducting business within the EU.

For instance, British businesses will still need to erase customer data to comply when individuals exercise their “right to be forgotten” or the entitlement to withdraw their consent to storing or using their personal data or to have their data deleted by a company that holds it.

“We’ve certainly given some thought to this,” said Wilton. “As a service provider, we hold huge amounts of customer data. If you buy a product or service from us and there’s a multi-year contract to manage it and receive updates, then there’s a lot of data that needs to be maintained.”

Irrespective of how Brexit proceeds, there will continue to be a massive amount of business conducted between the UK and EU. “It’s impossible to expect that we won’t be doing substantial trade,” said Wilton. “We are going to have to either observe GDPR, or something that’s quite similar, to continue conducting trade.”

Communicating with the team

Meanwhile back in the office, the message that Wilton has shared with his team regarding Brexit is to ‘Keep Calm and Carry On.’

“Because we’re balanced as a business between the UK and EU, we will just continue to do what we’ve done to date,” said Wilton. “We may choose to move more investments to more buoyant economies if the UK economy should stumble. But in the end, the best way to prepare people is to keep our operations flexible.”

Because Claranet has multinational operations, including a footprint in South America, the company can expand its workforce wherever it chooses. “We have options across multiple geographies,” said Wilton.

Wilton has also played a critical role in working with fellow members of Claranet’s C-suite in examining the potential impact of Brexit and planning ahead. “My involvement with the team isn’t just sharing expertise on the IT side of things, it’s making sure that we’re covering all of the angles,” said Wilton. “This includes assessing the potential impact of Brexit on sales or aspects of the company’s systems that are tied to different jurisdictions and protections."

“You have to treat it much like a major acquisition – do your due diligence and examine what it means function by function.”

Andy Wilton is an Advisory Board member for the 2017 London CIO Executive Leadership Summit on November 30, 2017. To learn more about the summit, including the speakers and the topics that will be explored, click here.