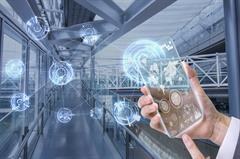 Despite the relentless drive to simplify IT, the CIO’s portfolio of responsibilities seems to keep growing. In addition to all the basic IT functions, many CIOs are also responsible for managing cloud, social and mobile deployments. I think it’s fair to say that sooner or later, every bit of new digital technology eventually ends up in the CIO’s wheelhouse.

One of the newer technology trends is smart building maintenance and operations. Spurred by the potential for saving huge amounts of money now spent on energy costs, almost all of the world’s large corporations are investing heavily in smart building technology.

Essentially, this means installing wireless sensors in thousands of machines and devices in every building the company owns or leases. Data from the sensors is collected, stored and turned into actionable information by advanced analytics located in centralized databases or in edge servers. The information gleaned from a building’s numerous systems is used to improve its energy efficiency and radically reduce its operating costs.

Some smart buildings have already achieved more than 100 percent energy efficiency, which means they actually generate more energy than they consume.

Why should CIOs care about smart building tech? Because it’s only a matter of time before many of the digital technology systems required to manage a smart building become the responsibility of the IT department.

From my perspective, it makes sense for CIOs to being familiarizing themselves with the basics of smart building technology.

In addition to being good for the environment, smart buildings are also good for the bottom line. Publicly held corporations are being pushed to disclose more details about their energy costs, and new accounting rules are putting pressure on companies to make better use of the space they own or lease.

There’s a strong economic case for smart buildings, and it seems logical to assume that IT will play a significant role in managing the numerous digital systems those buildings will rely on to function properly.