Taking the Next Step in a CIO's Career 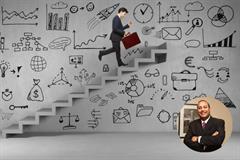 These days, more than ever, CIOs at top-tier companies are taking on greater and greater responsibilities. Some are taking on additional scope to move into 'CIO+ roles' (e.g., adding Procurement, Supply Chain Management, Facilities, Travel, Innovation, etc.). Some are moving into other broad-scope roles (e.g., COO). Still others are joining well-funded start-ups to large private/public company boards. I'm sure you see this happening all around you since these are not rare transitions anymore. If you already are doing or have done these things, the following will be old hat for you. If not, tune in.

To probe these CIO leadership trends further, we caught up with George Sheth, Managing Partner and Co-Founder of Diligent Partners, LLC, a national retained search firm in Long Beach, Calif.

HMG Strategy: George, how does one move from CIO to CIO+ role, as earlier defined?

George Sheth: Typically, these changes occur organically and over time. A CEO/COO/CFO who oversees the CIO recognizes certain skill sets in the CIO that can be expanded upon, concomitant with organizational needs. But a trust-based relationship between the CEO and the CIO must already exist. For example, a CIO may have shown prowess in vendor management, supply chain management, and financial management and get asked to take on a flailing procurement area.  However, multiple criteria must be true for this to occur and to work properly.

For one, the CIO must have his/her own house in order. The CIO must be seen as a strategic thought leader and large-scale execution leader who gets things done on-time and on-budget. That's a mixture of thinking about how to grow the business efficiently and delivering on large-scale initiatives. The CIO also must be a 'hand raiser' outside of IT, that is, one who is seen to regularly take on and succeed at large-scale corporate initiatives. Finally, the CIO cannot be seen solely as a technical nerd but rather as a business leader in IT clothing. When some or all of these elements are in place and the timing is right, risk-averse C-level bosses might consider offering new areas to manage to the superstar CIO. We've seen this time and time again.

How about transitioning from CIO to COO or other broad-based roles?

GS: This is a variation of the above, but there is an added complication. The CIO is typically not considered for such moves unless (1) many of the above conditions are true, (2) the company has a strong appreciation of technology as an enabler for more productive and efficient business operations, as well as an appreciation of the broad-based view of people/process/technology that CIOs typically have, and (3) there is an heir apparent in the IT organization to take over the CIO role.

Sometimes, companies will go out to search for the CIO role, conduct a transition once a new CIO comes in, and then move the former CIO role to the higher-level role, replacing an interim leader in that role. The key is for CIOs to periodically and systematically think about succession planning. This last piece is common sense but often forgotten -- for a great deal of leadership is the ability to grow other leaders.