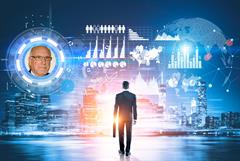 With $6.3 trillion in global technology spending in 2017 - roughly one-third of the current U.S. GDP -- why aren't we seeing massive gains in worker productivity, economic growth, business margins and quality of life?

The question was recently raised - and addressed - by Dr. Howard Rubin, Founder, Rubin Worldwide and a pioneer in the area of technology economics. Rubin was a keynote speaker at the 2017 Financial Services CIO Executive Leadership Summit on December 5, 2017 where he spoke to a group of top-tier financial services technology executives regarding emerging trends for digitization in the banking and financial services sectors and how CIOs are destined to become the Chief Technology Economists in their organizations as leaders and advisers for establishing IT monetary policy.

According to Rubin's extensive research, which cuts across 20 industry sectors and 4.5 million data points, technology-based transformation investments are typically a "random walk" in most companies - the technology investment "inputs" are disconnected from the business outcomes and there's little if any coordinate system for navigation. As Rubin stated, "CIOs are trying to navigate without the equivalent of latitude and longitude. They need a way to lay out a course in terms of both technology strategy and business outcomes."

"Part of your role as a CIO is to track the IT spending trajectory and calibrate yourself into the future," Rubin added. "The CIO of the future must become the Chief Technology Economist to help the enterprise plot the future, deal with the wind shear forces of the global economy, politics, and regulation, and make mid-course adjustments. It's about leading, reimagining and reinventing the enterprise to drive a culture of genius."

Why CIOs Must Benchmark the Future

Nevertheless, the aggregate business performance that's been generated from corporate technology investments in recent years hasn't exactly been eye-popping. Rubin recently analyzed a 'market basket' of major banks - JPMorgan Chase, Bank of America, Goldman Sachs, Credit Suisse, UBS, among others. What he discovered was that while revenue for the group was higher in 2006/2007 compared to 2017, so too was operating efficiency. Not surprisingly, profit margins for the group are actually lower now than they were ten years ago.

In addition, relative IT spending compared to 2006/2007 is also down for this group of banks, as is 'IT Intensity' (the level of technology spending as it relates to business results), as well as overall capital spending and overall grow-and-transform spending.

"It appears that because of global economic concerns since 2008, technology intensity has decreased with a resultant decline of technology leverage to drive operating efficiency, which manifested itself as margin declines to levels that remain below 2005 levels," said Rubin.

In order to successfully plot the IT spending trajectory and the returns that can be generated from these investments, CIOs and technology executives need to think and act differently, notes Rubin. This includes the need for CIOs to accelerate their response times to business opportunities, particularly as the C-suite is increasingly focused on business performance criteria such as speed-to-market and speed-to-innovation.

Successful business and technology executives are also able to "connect the dots" to engineer their transformation trajectories and plan accordingly for the interaction between technology, revenue, expense and risk and their impact on operational efficiency, customers, and products and services, said Rubin.

Rubin also noted the common habits of highly-effective technology and digitally-focused companies. While average companies typically have low levels of technology cost transparency, metrics maturity, or technology/process optimization, leading companies excel in these and other areas such as benchmarking, invention and innovation maturity, and outcome orientation that's centered on focused tech investments and measured by business impact.

This helps explain why tech investment leaders across all industries boast 2.5 times the operating margin of average companies.

As businesses enter the next era of digitization, CIOs and technology executives will need to rethink how they apply, manage, and measure digital investments, said Rubin. Citing a quote from a recent Thomas Friedman article, Rubin said, "We are undergoing a change in the 'climate' of technology and work. We are moving into a world where computers and algorithms can analyze (reveal hidden patterns), optimize (inform an airplane the desired altitude to fly at for optimum efficiency), prophesize (predict what your customer will buy next), customize (tailor a product for an individual customer) and digitize and automate more and more products and services."

It is predicted by Rubin that in light of these shifts, the trusted 'Run, Grow, Transform' model is no longer sufficient for managing investments in the digital and technology economy. "A more robust model is needed that embodies and differentiates legacy and digital investments along with the nuances of digitization itself," said Rubin.