There's No Stopping the Blockchain Train 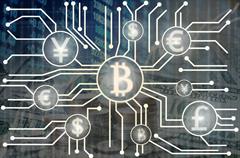 I predict that 2018 will be remembered as the year that blockchain leaped from the sidelines to become a major player in the technology universe.

The truth is that most people still don't understand what blockchain is all about. Even if they are vaguely familiar with blockchain, it's only because they've heard about its role in enabling cryptocurrencies like Bitcoin. This year, however, blockchain will move from the shadows into the spotlight.

In other words, blockchain is real. It's based on science. Although blockchain's association with Bitcoin made it seem sexy, its potential value as a foundational technology is virtually unlimited.

We've only begun scratching the surface of blockchain's amazing potential. In last week's HMG Tech News Digest, I included a short article about IBM partnering with Maersk to launch a global logistics company based on blockchain. IBM has been quietly developing blockchain expertise for several years, and its venture with Maersk is another proof point in blockchain's journey from obscurity to prominence.

The rise of blockchain reminds me of the rise of cloud computing. Initially, most of the "experts" dismissed the cloud as just a gimmick. But many of us perceived its value early on, and we became vocal evangelists for cloud computing.

We plan to play a similar role in the emerging blockchain revolution. We will report news about blockchain and highlight developments in blockchain technology. We will provide commentary and insight, based on our lengthy experience, deep expertise and uniquely valuable network of professional contacts in the technology space.

Make no mistake: Blockchain is here to stay and it will play a huge role in all of our lives. Please make sure to read our research article about blockchain on January 24th. We're at the beginning of a long and exciting trek into the future of information technology. Don't sit on the sidelines; join the revolution!