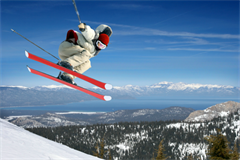 The 2018 Olympic Games in Pyeongchang, South Korea began yesterday, and I'm already feeling the incredible rush of excitement that comes from watching the world's best athletes compete for gold, silver and bronze medals in winter sports like skiing, skating, snowboarding and ice hockey.

For leaders and executives, the Olympics are more than sporting events - they are high-value lessons in facing up to life's supreme challenges and winning the ultimate victories. Held on the Korean peninsula in a country that's still technically at war with its neighbor to the north, the 2018 games have an inescapable tension.

As a skier, I'm keeping my eyes on Mikaela Shiffrin. She is favored to win a gold medal in the slalom and may also medal in the Giant Slalom. She's dominant in those two races, and she's also likely to compete in the downhill and the Super-G, two of the fastest races of the winter games. She's not just competing for medals - she's competing for complete domination of the sport.

"Skiing down an ice mountain at 80 mph, if you catch an edge, before you even can blink, you're in the fences on the side of the hill. Normally, crashing that fast, you're going to get injured," she told the New York Times.

For skiers like me, Shiffrin's technical prowess is simply miraculous. Her laser-focused technical skills enabled her to win the world championships in St. Moritz, Switzerland in 2017, beating hometown favorite Wendy Holdener by 1.64 seconds -- an eternity in the world of alpine ski racing. She is a role model in so many ways, for so many people, all over the world.

I find it absolutely amazing that Shiffrin, who won the gold medal in the slalom event at the 2014 Winter Games, endured a grueling regimen of cross-training as part of her recovery from a knee injury suffered during warm ups for a December 2015 event in Sweden. Watch the video if you want to see a superlative example of an athlete with total dedication to achieving victory.

Frankly, we can all learn incredibly valuable lessons from watching world-class athletes like Shiffrin, Lindsey Vonn, Shaun White, Chloe Kim and Nathan Chen. I find them absolutely inspiring. They are role models for focus, determination, courage, strength and self-discipline.

I hope you will be watching the 2018 Winter Olympics. I know that I'll be watching and learning lessons from some of the world's best and bravest competitors.

Technically, the opening ceremony and parade of nations were held Friday evening local time, but unless you were up at 6 a.m. ET or 3 a.m. PT, you probably didn't see them. Fortunately, NBC will air a tape-delayed broadcast of the opening ceremonies at 8 p.m. EST tonight, with commentary from Katie Couric and Mike Tirico.