Lessons in Extreme Preparation, Mindset and Disruption from Living Legends at the 2018 Winter Olympics in Pyeongchang 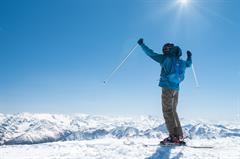 If you love skiing, you must be absolutely thrilled by the epic battles between world-class skiers at the 2018 Winter Olympics.

Mikaela Shiffrin's incredible victory in the giant slalom earned her a well-deserved gold medal. But the strain of back-to-back races proved too much, and her quest for a gold medal in the women's slalom on February 16 was unsuccessful.

"Only one alpine skier in history had won Olympic gold medals on consecutive days, Germany's Katja Seizinger in 1998," writes ESPN's Wayne Drehs. "It was an instant reminder that nothing in sports is automatic. Especially when the event carries as many uncontrollable variables as alpine skiing."

Despite the setback, Shiffrin is a huge source of inspiration. She is so much more than a spectacular athlete. She is a role model for everyone who faces challenges and overcomes them. Her victories blaze a trail for the rest of us; they show us how preparation and mindset really matter when the stakes are high and winning is the only option.

Her courageous decision to train for four different races (slalom, giant slalom, downhill and super-G) reminds us that it's possible to master multiple skill sets - if you're willing to prepare and do everything you can to achieve your goals.

Why are those important lessons for us to learn? They're important because the complexities of the modern enterprise require more than simply setting goals. Careful preparation, strong leadership, and winning strategies all matter. Today, companies need to achieve success in core, parallel and new markets. They need to genuinely understand the strengths and weaknesses of their competitors. They can never sit still and accept the status quo. They must disrupt - or be disrupted.

We recently interviewed Jedidiah Yueh, the Founder and Executive Chairman of Delphix, a Silicon Valley company that has changed the dynamics of managing and consuming data. Jedidiah reminded us that companies need to protect themselves from more than just bottom-up disruption. "They also have to worry about over-the-top disruption from products like the iPhone or the Tesla, which target premium market segments and then move top-down," he said. Major acquisitions, such as the purchase of Whole Foods by Amazon, can also disrupt markets.

Watching amazing athletes like Shiffrin, Lindsey Vonn, Shaun White, and Chloe Kim reminds all of us that victory belongs to those who are willing to prepare and train. I urge you to watch this video of Mikaela Shiffin's unbelievably intense training regimen.

The Olympic Games also remind us that real winners aren't afraid to step out of their comfort zones and take on additional challenges. Real winners have the courage to disrupt the flow, and turn disruption to their advantage.

As I wrote in Monday's edition of the newsletter, the Olympics are more than sporting events - they teach us how to deal with life's supreme challenges and win the ultimate victories. When we watch the Olympics, we're not just watching superior and exemplary athletes performing unbelievably amazing feats - we're watching ourselves and we're seeing what we can do when we push ourselves to the max and excel as we've never excelled before.