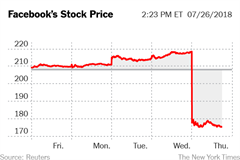 Facebook Shares Tank After Disappointing Earnings Call; Is This a Bump in the Road or a Wakeup Call for Investors?

Is this the beginning of a new era of diminished expectations for the world's greatest social network, or will Facebook get its house in order and bounce back? Some analysts wonder if the Facebook stock debacle, which erased more than $110 billion in market value, is a long-awaited correction that was destined to occur at some point.

"When was the last time you spent time on Facebook engaging with a high school friend? When was the last time you truly read the garbage blowing up your refined newsfeed? When hasn't CEO Mark Zuckerberg post-Cambridge Analytica talked about massive investment in new privacy tools and people to police the site? The fact is that any common investor would have been able to detect these clues and realized Facebook was nearing a sharp revenue and operating profit growth slowdown later this year and in 2019," writes Brian Sozzi of The Street.

Those are good questions. Some investors I know are calling this a great buying opportunity, but I'm not so sure. What are your thoughts?

Apple's technology is under the microscope again, this time because of suggested connections between its new T2 chips and kernel panic crashes on newer Macs.

"Hot on the heels of the last MacBook Pro controversy about overheating concerns - which followed the previous uproar about keyboard issues, which, in turn, followed the original outrage about USB-C ports when the current design was first introduced - is yet another potential issue with Apple's latest laptops. This time, it's centered around the T2 chip that enables things like secure boot, better encrypted storage, and 'Hey Siri' support," writes Chaim Gartenberg in The Verge. "According to a report from Digital Trends, that chip may also be causing kernel panic crashes on both the recent 2018 MacBook Pros and last year's iMac Pro, which also features the chip."

If you have trouble remembering user names and passwords, Google has some good news. It recently introduced a USB-device that lets you log into sites without the hassle of entering passwords and without worrying about compromising your security.

Google's Titan Security Key includes firmware developed by Google engineers. It's currently available to Google Cloud users and may be made available to the general public in the near future.

"Google's key is based on the FIDO U2F protocol," writes Kevin Parrish of Digital Trends. "Borrowing from the smart card concept, you merely insert the key into a USB port or tap it against an NFC-compatible smartphone."

Google says the new key makes it harder to become the victim of phishing attacks and credential theft. For high-value users, such as cloud administrators, that will be a major selling point.

While most people have been paying attention to headlines about the trade war between China and the U.S., China has been quietly moving forward in the development of renewable energy sources.

"China has committed $360 billion through 2020 to the development of renewable power and is well on its way to being the dominant power for the development and production of solar and wind power," writes Emanuel Yi Pastreich in The Korea Times.

Pastreich's article is worth reading. Although it focuses mainly on Korea, its main thrust - that China is rapidly developing alternative sources of energy - will have an impact on all of us. He rightly describes China's pivot toward fossil-free fuel technologies as "monumental" and warns against pursuing backward-looking strategies for economic growth.