Welcome to the Era of Trillion-Dollar Market Caps; Which Companies Will Be Next? 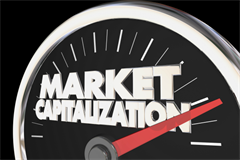 Two major events in the technology world occurred last week. One generated headlines in every major media outlet, while the other was barely noticed.

Without question, we have entered a new era of wealth and value creation. But these new levels of wealth and value also pose risks. In the past, hundreds of companies contributed to the economic health and well-being of our nation. Today, the list of super-companies has dwindled significantly.

In other words, fewer companies are creating more wealth and value than ever before. We've all heard the term, "don't put all of your eggs in one basket" and suddenly it seems as though the number of "baskets" has been substantially reduced.

All of us in this industry have been trained to avoid creating single points of failure. That's why we spread our risk and hedge our bets. I'm delighted that big U.S. companies like Apple, Amazon, Google and Netflix are having great years and generating incredible value for their shareholders. Like most of us in the technology industry, I'm in favor of strong competition at every level. Competition drives innovation and innovation is essential for a healthy economy.

Apple's ascent overshadowed a report in the Wall Street Journal that GE is now planning to sell its digital assets. For those of us who had been following GE's entry into the software business, this is disappointing news. Under the leadership of former CEO Jeff Immelt, GE invested billions to create and grow a digital business unit. It also developed Predix, a specialized digital platform for the Internet of Things. Clearly, GE's new leadership has a different vision of the future.

The plan to reposition GE as a global software company didn't work out. A lot of talented people poured their hearts and minds into the effort, but success eluded them.  Despite its investments and good intentions, GE couldn't keep pace with the speed of change in the 21st century software industry.

If there's a moral to the story, it's that success in today's markets really does depend on speed and execution. It's not enough to have a great idea - you need to bring your idea to market before someone else beats you to the punch.

Apple understands why speed and execution are absolutely imperative. That fundamental understanding is deeply woven into Apple's corporate and cultural DNA. Amazon, Google and Netflix have similar cultures, which is why their valuations have also reached stratospheric heights.