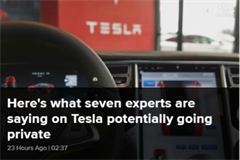 Elon Musk's tweets earlier this week about the possibility of taking Tesla private have raised eyebrows all over the world. Now it seems like the government is taking a closer look at whether Musk's tweets violate U.S. securities law.

"Whether it was an impulse tweet or not, it's likely that the Securities and Exchange Commission has already opened an investigation and is looking for documentation to back up Musk's comments," write Robert Ferris and Dawn Kopecki of CNBC. "The SEC's rule 14e-8 basically prohibits publicly traded companies from announcing plans to buy or sell securities if executives don't intend to follow through, don't have the means to complete the deal or are flat out trying to manipulate the stock price."

It's not clear whether Musk has the funds lined up to take the company private or whether he has other plans in minds. In any event, the story is far from over. 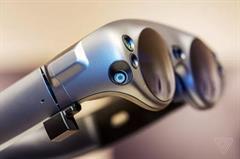 We all moved a step closer to enjoying virtual reality experiences this week when Magic Leap began shipping the Magic Leap One Creator Edition, a "mixed reality" headset for consumers priced at $2,295.

"As Magic Leap has previously revealed, the Magic Leap One is a three-part device consisting of glasses called Lightwear, a wearable computer called the Lightpack, and a handheld controller," writes Adi Robertson in The Verge. "The Lightwear uses a combination of tracking cameras and a lens called a "photonics chip" to project images over the real world, while the Lightpack features a Nvidia Tegra X2 mobile chipset, 8GB of memory, 128GB of storage, and a battery that's supposed to provide up to 3 hours of continuous use and charges over USB-C." 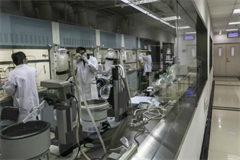 Between the heat and the headlines, it's been an unusually odd summer. After warning of dire repercussions from a trade war with China, analysts are tempering their forecasts over the likely outcome of the tussle.

In some respects, the trade war has actually weakened China's hand by introducing a level of uncertainty that is flummoxing its central planners and subtly challenging its political system. Despite its vast efforts to modernize, China still struggles to understand the nuances and oddities of global trade and economics.

There have been several good articles about the unforeseen consequences of the trade war. I recommend reading Keith Bradsher's astute analysis in The New York Times. 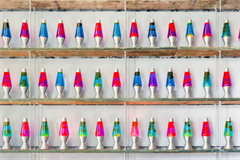 A San Francisco company called Cloudflare has come up with a unique tool for amplifying its cyber security: the lava lamp. Apparently lava lamps do a better job of creating true randomness than computers, and that makes them useful for thwarting cyber criminals.

"Every time you log in to any website, you're assigned a unique identification number. It should be random, because if hackers can predict the number, they'll impersonate you. Computers, relying as they do on human-coded patterns, can't generate true randomness-but nobody can predict the goopy mesmeric swirlings of oil, water, and wax. Cloudflare films the lamps 24/7 and uses the ever-changing arrangement of pixels to help create a superpowered cryptographic key," writes Ellen Airhart of Wired.