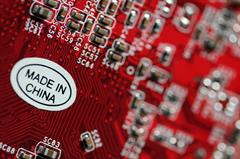 China's economic power is growing, but the growth is neither monolithic nor guaranteed. Under the surface, there are choppy cross-currents, dangerous rip tides and strong tidal flows that could overturn our expectations.

Many observers have predicted that China will soon become the dominant player in global technology. China has clearly expressed its desire to become the world leader in tech, but the truth is that China is still playing catch-up.

Despite the rise of tech giants such as Alibaba, Tencent, Didi Chuxing, Ant Financial and Huawei, China does not pose a serious competitive threat to legacy providers of enterprise infrastructure and services. That could change, but it seems unlikely that established titans like Microsoft, Google, Oracle, IBM and SAP will simply roll over and allow China to gobble up chunks of their traditional markets.

It's also important to remember that the competition extends beyond a simple "East vs. West" scenario. India and Indonesia are home to a new generation of innovative tech firms that are poised to move swiftly into emerging Asian markets.

China's meteoric rise is by no means a guarantee of steady or consistent growth over the long term. China's success is truly amazing, but there are hazards in its future. A new white paper from the Organisation for Economic Co-operation and Development (OECD) predicts that China's demographic policies will result in a sharp economic decline soon after it surpasses the U.S. economy in 2030. After that, the U.S. will return to the top spot in the global economy.

"The forecast for the U.S. to outstrip China is not a prediction of any economic miracle in America - just an acknowledgment that China has set itself up for a brutal demographic collapse," writes Daniel Moss of Bloomberg. "Shortly after China overtakes the U.S. economy in size, all the legacies of the one-child policy coalesce as the society seriously ages, stalling out the Middle Kingdom's expansion. The U.S. will face demographic challenges, too, but nothing like this."

It's important for technology leaders and executives to understand the nuances and complexities of our relationship with China. It would be foolhardy to ignore China or to underestimate its potential for disrupting traditional markets.

At the same time, it would be imprudent to ascribe too much power to China. For the time being, the best course is keeping a close eye on China's rapidly growing tech sector and scanning the horizon for competitive opportunities as they arise.