Amazon Has Demonstrated it Can Dominate the Cloud, But There are Risks for its Customers in Volatile Industries 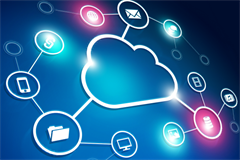 With a booming economy and nearly full employment, this year's holiday shopping season will bring joy to many retailers. But most of those retailers will also be looking over their shoulder at Amazon, which continues to expand its dominance in consumer and industrial markets.

"Amazon started this year with 43 percent share of e-commerce," says Vandana Radhakrishnan, a partner in Bain & Company's New York office. "Our belief is that by the end of the year, half of all U.S. e-commerce sales will be owned by Amazon. To us, that's a striking number."

Radhakrishnan's made her comments during a CNBC interview in which she described Amazon's focus on holiday sales as "truly maniacal." Amazon's strengths, she says, include speed, price and exclusivity through carefully chosen private labels brands.

I firmly believe that Amazon's rise as an e-retailer is part of a much larger and significantly more complex story. That's the reason why technology executives need to focus on Amazon and learn from its example.

For instance, Amazon doesn't limit itself or set artificial boundaries on its own growth. From Amazon's point of view, the entire world economy is its playing field. Amazon will compete for market share wherever it perceives an opportunity.

Who would have predicted that a website that was initially devoted to selling books would become the world's largest provider of cloud services?

As technology executives, we need to zoom in and genuinely understand the consequences of Amazon's rise as a tech vendor. On one hand, it's great that Amazon makes it possible for companies large and small to use its genuinely vast computational resources. On the other hand, does it make sense to expose your data to an enterprise with truly unbounded ambitions?

There's a growing sense that partnering with Amazon could backfire, especially for companies in potentially volatile industries such as health care and retail grocery, which are ripe for disruption.

"AWS is the world's biggest public cloud, generating $6.68 billion in revenue for Amazon in the third quarter, up 46 percent year over year. But as Amazon expands into countless new areas, from grocery stores to health care, some companies that have previously worked with Amazon have found a partner becoming the competition overnight," writes Jordan Novet of CNBC.

Novet's article is worth reading closely, since it also reveals the extent to which AWS impacts the development of open-source software. Open source has been the "secret sauce" of innovation in the information technology business for more than 20 years, even though most people outside the industry are unaware of its critical importance within the global IT ecosystem.

Amazon's dominance will have multiple consequences across numerous sectors of the economy. No industry is safe from disruption. If Amazon believes it can compete successfully against you, it probably will.