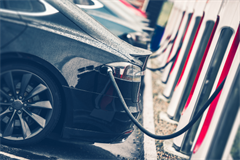 The race to become the best and biggest maker of electric vehicles now covers two continents. Tesla has opened a factory in China and Chinese companies are launching EV startups in Silicon Valley.

“A ground-breaking in Shanghai attended by Tesla Chief Executive Officer Elon Musk last week marked what will become the first factory in the nation entirely owned by a foreign automaker,” writes Blake Schmidt in Bloomberg News. “In Tesla’s Silicon Valley neighborhood, meanwhile, there are now about a dozen electric automakers with Chinese owners or backers setting up shop or recruiting Musk’s former co-workers. These well-funded startups, some of which haven’t sold a single car, are buying up factories, testing prototypes on public roads and kitting out lavish offices in the San Francisco Bay Area. Landing a former Tesla executive has become a top prize.”

For some Chinese entrepreneurs, becoming the next Musk has apparently become an obsession. It’s really not surprising, given Musk’s fame and fortune. Whether his challengers will succeed, however, remains an open question.

Netflix plans to raise prices across all three tiers of its service, raising questions about whether it can sustain its growth amid stronger competition and higher levels of debt.

“The big risk for Netflix is that subs balk at price increases and leave, particularly amid some pullback of licensed content by traditional media companies,” writes Audrey Schomer in Business Insider. “It's increasingly important for Netflix to add subs as subscriptions continue to be its only revenue stream, and as it continues to plow billions of dollars into content and talent deals (a projected $13 billion in 2018, per Goldman Sachs estimates, of which 85% is allocated to originals) and rack up billions in debt.”

Since almost all of us in the HMG Strategy network travel extensively on business, I decided to include this item about proposed designs for the upcoming major expansion of Chicago’s O’Hare International Airport.

Chicago city officials unveiled “five striking designs … many with swooping roofs and some with quirky features like hammocks where travelers could take a nap before flights,” write Blair Kamin and Mary Wisniewski of the Chicago Tribune. “The proposals from top architects for the $8.5 billion expansion, whose centerpiece will be a new global terminal that combines domestic and international flights under one roof, are all sleekly modern. Three would put naturalistic touches — clusters of trees, wood ceilings or patches of grass—inside the terminal.”

The Tribune article includes an excellent photo gallery showing the five designs. I recommend taking a look – they are fascinating!