Apple has created an explainer on its web site to clarify it policies on apps. The company is facing criticism over how it decides which apps to approve and which to reject.

“We created the App Store with two goals in mind: that it be a safe and trusted place for customers to discover and download apps, and a great business opportunity for all developers,” Apple says on the site. “We take responsibility for ensuring that apps are held to a high standard for privacy, security, and content because nothing is more important than maintaining the trust of our users.”

The decision to place an explanation of its policies follows criticism that Apple used its marketing power to create unfair advantages for its own apps.

“Earlier this month, the Supreme Court ruled that iPhone owners can sue Apple for allegedly operating a monopoly through its App Store. And there's been outcry from makers of parental control apps that Apple unfairly banned their software because their apps compete with Apple's own software. Amazon, Netflix, Spotify and other heavyweights have also criticized Apple's App Store model,” writes Shara Tibken in C-NET. 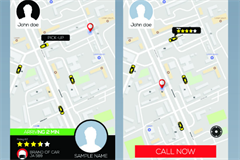 Uber announced this week that riders with low ratings may lose access to the ride-sharing service. Uber already has a policy in place for handling drivers with poor ratings.

“Safety risks for passengers are widely recognized thanks in part to a variety of reports about drivers assaulting riders. Uber's new policy reflects concerns about driver safety, which was underscored by video that recently surfaced of a Lyft driver being violently attacked by a passenger,” write Ben Kesslen and Andrew Kozak of NBC News. “The new policy comes after Uber’s $90 billion initial public offering was met with protests from some drivers who feel unfairly compensated and mistreated by the tech company.”

On a related note, here’s the link to a highly useful article by David Pogue in The New York Times in which he offers tips and advice for getting the best rides from Uber and Lyft. The article is definitely worth reading.

Should There Be Global Rules for AI?

The World Economic Forum is hosting an event to consider global rules for governing the use of artificial intelligence.

“The WEF will also announce the creation of an ‘AI Council’ designed to find common ground on policy between nations that increasingly seem at odds over the power and the potential of AI and other emerging technologies,” according to an article by Will Knight in the MIT Technology Review.

The idea of creating some kind of international governance framework seems especially relevant in light of intense competition between the U.S. and China for AI dominance.

“The two chairs of the WEF’s AI council will be Brad Smith, president of Microsoft and head of the company’s legal and corporate affairs teams, and Kai-Fu Lee, a prominent Chinese AI expert and investor who has written a book called AI Superpowers, outlining China’s rising technology prowess,” writes Knight.