Should You Curse At Work? 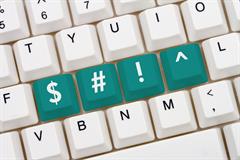 For those less inclined to pore through this entire essay, here’s a brief summary of my answer to the question posed in the title: Uh, maybe – but only occasionally – if ever – and never in directed anger, especially toward any person or group. If you can parse and interpret that sentence, then good for you – but I think you get the gist: Light cursing might be acceptable at your place of work, but only if the circumstances truly warrant.

What’s meant by cursing is surprisingly tough to define. George Carlin’s famous stand-up on the topic provides a good start, but local norms will always apply. For example, some of the words occasionally heard in TAG Cyber’s WeWork office in Manhattan would not be well-received in the vice principal’s office of my Catholic alma mater. Such local differences make it harder to generalize, but useful recommendations can be made nonetheless.

My own experiences with workplace cursing – and yes, the occasional blurt by yours truly – have spanned many environments over many decades. At one end of the spectrum, I’ve sat quietly and respectfully in ultra-conservative, wainscot-paneled digs wearing my best suit, where utterance of a curse would seem about as appropriate as hopping up onto the conference table to dance. (Sorry for that image.)

At the other end of the spectrum, however, as a retail business owner for many years, I’ve negotiated leases with tough Jersey landlords. Such fat-cats literally sit with unlit cigars in the corner of their mouths as they scowl at you from across the table. Not uttering a curse at the appropriate time (and luckily I spent much of my life in Hoboken – so I know how to do it), would be interpreted as a sign of weakness. Sometimes you do what you must do.

But for the vast majority, work is at neither end of these extremes. Rather, work is a friendly place where you casually interact with other employees, contractors, suppliers, and customers. People are mostly business-like, and while ages can certainly range, you can be confident that minors will not be within earshot of anything uttered. We can thus assume that for you, work is populated by adults – at least in terms of their chronological age.

As such, I would offer the following three rules for whether to curse in the context of your work activity. Again – these tips are designed to be interpreted and tailored to your local situation, because significant differences exist between industries, regions, and countries. For example, if you are reading this essay in the UAE, then public cursing can land you in a Dubai prison. So, please interpret my comments appropriately:

Rule 1: Never direct a curse toward a person or group.

First, understand that a significant difference exists between using a curse to joke about a situation, and using a curse to joke about a human being. When a co-worker, for example, chuckles and laments: “Man, we have a %$&!@# of work to do before this software can be delivered,” that comment underscores the significance of a situation. It may not be an appropriate reference in some settings, but it is certainly not malicious.

In contrast, when a curse directly references another human being, it is always unacceptable. Always. Even if your curse is intended as a personal compliment, those listening will likely not interpret it that way. You would be doing yourself a big favor to adopt the universal rule that curse words are never to be used as adjectives for people or groups – even if it seems innocent. Don’t aim curse words at people. Ever.

Here’s a note to millennials: If you’ve read this far (which seems unlikely), I already see you rolling your eyes. Look – I run a start-up company teeming with millennials, and I understand that generations choose words differently. But principles remain: Using curse words in references to other people or groups is never a good idea, even in hip, bro-cultured, frat-oriented software start-ups located near bookstore cafés in Williamsburg.

Rule 2: Always factor in the likelihood of your curse offending someone.

When you are in any business setting with other people – especially if people are present that you might not know – then you should factor in the possibility that a curse might offend someone. Now, I’m not telling you whether to curse in that setting. I’m just saying that you should always factor in the possibility of someone present being offended. This is a useful habit, and the following example might help demonstrate:

Suppose that you are pitching an advertising campaign to buyers. You want to deliver some punch with the visual image you’ve designed. As you unveil the image, it hits you that a curse might provide some spice, so you consider saying this: “We believe this message will drive your company to the &$%^*@# top!” My advice is to be careful with this. Pause and think twice before you let a curse word out, because someone might be offended.

Now, look – if your advertising message is being pitched to a Pittsburgh beer company for Monday Night Football broadcasts, then cursing will probably be fine, perhaps even welcomed. But under the majority of circumstances, your cursing might rub someone the wrong way. With all use of curses at work, you just never know who is sitting there thinking you are a total jerk for what you just said. So please be careful.

Rule 3: If you must curse, then do it sparingly and with positive purpose.

If you’ve already decided that your cursing will be directed at situations and not people, and that those in the vicinity are likely accepting of such language, then an additional constraint should apply: Cursing should be used sparing – and always with positive, benevolent purpose. This implies that you must understand the nuances of your language and communications. Perhaps another example might help:

Let’s suppose that you see the possibility to launch some new software capability early. Things are going well, and if the team agrees to push just a little harder, then great things might happen. If you are getting the troops together to give them a pep talk, then sprinkling in a curse word – and it is best highlighted by occasional and sparing use – might just provide a little spark to the team’s upbeat mood and morale. It might be just fine.

On the other hand, suppose that your software is being developed too slowly and a planned capability is likely to deliver late. You therefore get the troops together to speed things up. In my estimation, during delivery of that message, perhaps the worst thing you can do is to start cursing. With such negative purpose and connotation, you will equate your language with a lack of control and decorum. Don’t do it.

Before I close, I have an anecdote you might enjoy: As a longtime cyber security professional, I’ve had the honor to interact in tough operational environments with people performing blue collar tasks in harsh settings. These fine people are the salt of the earth and I admire their honesty, persistence, and hard work. They are awesome, but – uh . . . they can dole out some doozy curses when the time is right.

So, yours truly – Mr. Chameleon – would sometimes use tough language to show that I was part of the team. In retrospect, I probably seemed ridiculous doing this. Anyway, one evening, I noticed one of their lead executives seated across the room at a dinner. I’m certain I must have doled out some juicy curse words in his presence. He’s from New Jersey, and I figured it would be OK (even though I don’t ever remember him speaking that way).

Walking over to him at the dinner – and I had my wife there as well – we gradually got closer to his seat at the table. And much to my amazement, I realized that this executive, Mr. Pete Cornell, was standing up to greet us, and he was wearing the collar of the ordained deacon. I gulped, because I had no idea, and said this to Pete: “I’m so sorry, man. I can’t imagine some of the things I must have said in your presence.”

Afterward: Pete smiled and was gracious as always. He gave me the absolution I needed, and now, in his post-AT&T, and post-Google days, Pete serves as an important part of the executive team at TAG Cyber. It’s so nice to close an article with a happy ending – and a $%^&*@ good one at that.