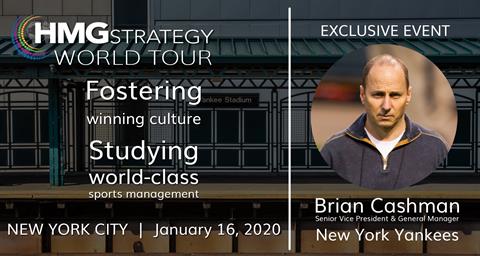 Winning matters, and the road to success is always paved with strong convictions for teamwork, collaboration and a powerful dedication to lead, reimagine and reinvent the enterprise to execute world-class strategies.

In an effort to learn about the components of a winning team, we’re studying world-class sports management strategies. Our friend Brian Cashman, Senior Vice President and General Manager of the New York Yankees will be joining our community in New York this Thursday, Jan. 16, to discuss what it takes to create a winning culture, and how to foster a triumphant ethos.

At this exclusive (invite-only) HMG Strategy World Tour `Meet-and-Greet,’ Cashman is going to share why building a team as strong as the New York Yankees is crucial to success in any business or organization.

The Bronx Bombers are widely regarded as one of the leading teams in MLB and have been for nearly 120 years. It’s not all hype either, the proof is in their accolades – 27 World Series titles, 40 Pennants, 19 American League East Division titles and 7 wild card berths.

Incredible athleticism is largely responsible for these successes, but even more important is the sense of community, team and family that the Yankees are run and managed by.

True to the classic adage of premier coaches, “A champion team will always beat a team of champions.”

Retaining a strong core value of developing world-class strategies and perennially developing winning teams have made the Yankees one of the premier sports teams on the planet – and applying those values to your own enterprise is a bedrock for continuous growth and disruption.

Any organization needs strong team skills, but in celebration of the HMG World Tour NYC with Brian Cashman, let’s visit some of the most important sports victories in recent years credited to leadership, reinvention and reimagining to create a world-class approach.

On Nov. 2, 2016, the Chicago Cubs took the world by storm with a World Series triumph, 108 years in the making. This was Chicago’s 11th participation in the series, but their last win before that was in 1908.

After the World Series victory, then-Manager Joe Maddon said he credited persistence with reinventing the Cubs’ strategy and keeping a fresh attitude. His players didn’t run away from the 107 teams that came before their 2016 win, but they ran head on against them, he said.

“There’s been a lot burden placed, [regarding the past] and quite frankly it’s misplaced,” Maddon said. “It’s today, it’s now, it’s present tense.”

Evidently, you can teach an old dog new tricks, and this psychology goes way beyond sports management. Reimagining the enterprise for any organization is a crucial part of keeping a sharp competitive edge.

The 2015 FIFA Women’s World Cup Final ended in favor to the U.S. team, in their first win of the 21st century. Four years later, the U.S. women’s team came back to become the second ever team to win consecutive titles.

Captain of the U.S. women’s team, Megan Rapinoe, told an ESPN reporter after the victory that skill alone was not what led the World Cup title. Developing and executing the game plan together as a team made the difference – it made them unbeatable, she said.

“At every moment through the whole cycle, where we should have splintered, we always stuck together,” Rapinoe said.

Translating this conviction to the world of business and technology means marching to the same beat as your colleagues, the C-suite and the board. Success is hindered without the important values of a winning team, and that applies to a much broader scope than the world of sports.

Talent recruitment is always a strong aspect of building a winning team. Even though Durant was honored as MVP for both victories, then-team captain Stephen Curry stressed the importance of his organization wholly, on the road to success. At their 2018 official championship ring ceremony, Curry recognized the hard work and achievement of his team from the MVP down to equipment manager.

A chain is only as strong as its weakest link, and the Warriors have taught us two valuable lessons this decade. Talent development is key to developing winning strategies, but collaboration across the enterprise is how world class teams are made – in sports or otherwise.

At HMG Strategy, we support the next generation of winning leaders that put the type of heart and passion into building their world-class teams that have brought these incredible victories to light.

I’m thrilled that our friend Brian Cashman is so willing to share his spectacular insights with our community, and we cannot wait to join him at the HMG Strategy World Tour NYC on Thursday.

To learn more about our winning team, and the 7 pillars of trust that drive our premier business model to high levels of success, visit the HMG Strategy website here.