Hunter Muller Predicts: Rise of Tesla Will Continue, Driven by Unparalleled Levels of Innovation and Sharp Focus on Key Markets 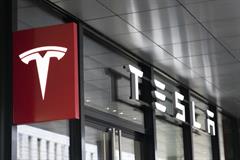 As a technology leader, I am continually amazed and impressed by Elon Musk’s unique ability to innovate and achieve success in critical markets such as automotive, aerospace and energy.

Tesla continues to generate positive headlines at a time when other manufacturers are either struggling for attention or wrestling with product issues. Last week, Consumer Reports highlighted the improved quality of Tesla’s new Model 3 cars, resulting in a deluge of favorable media coverage.

“The company … jumped into the top half of auto brands ranked by the auto team at Consumer Reports, which analyzes data on major automakers and tests hundreds of vehicles,” wrote Phil LeBeau of CNBC.

I genuinely admire how Tesla has created a great product that appeals to a remarkably wide range of potential consumers. “The Model 3 proves that EVs can challenge conventional upscale sedans by offering invigorating performance with a high-tech vibe. It boasts rapid acceleration that’s delivered in near silence, with instant passing power available at any speed and enough thrust to push the driver back into the seat. The car’s superb handling and quick, precise steering help it feel like a sports car,” wrote Jeff S. Bartlett in Consumer Reports.

Tesla is also gearing up to “revitalize” its solar energy and storage business, which could provide the company with decades of solid earnings as global markets move toward renewable energy sources.

“Even with a record fourth quarter for its solar energy and storage systems business, Tesla’s energy revenue declined by over $24 million in 2019, after several rounds of layoffs that started the prior year,” wrote Lora Kolodny of CNBC. “The company is now under pressure to get the business going again. Tesla said, in its annual financial report on Thursday, that it’s ramping up solar photovoltaic production at its plant in Buffalo, New York.”

From my perspective, I’m confident that Musk and his team will figure out a strategy for revving up the company’s solar and storage business. I am especially impressed by Tesla’s ability to monetize its steady stream of technology innovations. I foresee a bright future for the company, and the market supports my view.

“In the past 30 days, four estimates have gone higher for Tesla while none have gone lower in the same time period. The trend has been pretty favorable too, with estimates increasing from 55 cents a share 30 days ago, to 82 cents today, a move of 49.1%,” according to a Zacks Equity Research report published on Thursday Feb. 20. “Meanwhile, Tesla’s current year figures are also looking quite promising, with nine estimates moving higher in the past month, compared to none lower. The consensus estimate trend has also seen a boost for this time frame, increasing from $6.35 per share 30 days ago to $7.85 per share today, an increase of 23.6%.”

Meantime, SpaceX is pioneering a novel approach to iterative design processes, which can dramatically accelerate the development of new spacecraft.